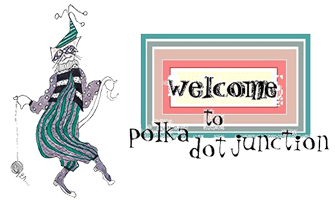 The Mayor of polka dot junction

Born and bred in a pink caboose on the Upper East Side of the junction   .  .  .

Our captivating Mayor is the closest thing to royalty that we can claim. As a descendant of polka dot junction’s oldest family, she is generally referred to as La Grande Mayor or simply La Mayor. As a very young and rather unusual creature, she taught herself to jump, dance and leap on two feet. As novel as this may seem, it has become the norm for many of the four-legged residents of the junction. Some say “half cat, half human” in describing her. She doesn’t seem to conform to any standard species but does manage to maintain a state of moderate chaos Her favorite activities include spending quality time with her little mini-me known as Wee One, grape stomping (two feet only!) and doing lots of just plain nothing. You will notice that her image graces quite a few of the designs and products available for your own personal pleasure at polka dot junction!

You may on occasion notice a small little jester cat tagging along after The Mayor. That is Wee One who aspires to one day hold a position in managing the organized chaos of polka dot junction, but that’s only if she doesn’t become lead guitar player in a rock and roll band. Clearly Wee One is a little “Mini-Me” of La Grande Mayor. According to legend, Wee One mastered walking on two feet from day one. This is but, just as likely to be hearsay. She has an acute eye for appearances and nuances in behavior which certainly accounts for her mastery of all things “Mayoral”. Guesses are that one should never judge by appearances only!

He is a descendant of one of the oldest polka dot junction families known as the McWiggins. Junior McWiggins has not proven to be particularly successful at frightening crows. It’s a fact and not hearsay that he and Crow go everywhere together. Scarecrow is a triplet and neither of his identical siblings mastered the skill of scaring a crow. Oh well . . . They all excel at the art of and it goes without saying that because of their stage mother, all three can tap dance up a storm when on solid ground. Unfortunately, that is almost never because they are generally suspended several feet above!

The Cats of Polka Dot Junction

Beyond the members of “The Royal Family,” there are other feline creatures inhabiting the junction. Some of you will recognize Party Cat from the mugs, plates cards sold at polka dot junction. Party Cat also has aspirations of one day becoming the mayor. Some of his behavior will have to change before that becomes any sort of possibility. PC’s job is to show up at parties and holiday celebrations but only those for which he has received an invitation. Last Halloween he was caught crashing the annual Ghost Martini Halloween Party. We all know how clannish the ghosts here at the junction can be. For further documentation of this event, please

Poor Cat is aptly named due to the fact that he is endlessly (and it appears quite desperately) hanging on to the back of a broomstick. Poor Cat’s owner seems to be unaware. Some of the witches and other cats think that The Mayor should be notified, social services as well. With the upper body strength that this little guy displays, he could do far better in terms of He really is quite

Another notorious and highly visible cat at the junction is known as Cat Cat. This is because he is perpetually engaged in the Pilates exercise known as “Cat”. You can see from his picture that it involves unsurpassed core strength which he apparently is quite vain about. It’s not simply hearsay that he is a narcissist. Why else would he pose as such in front of the full moon for all to see?

The Witches of Polka Dot Junction

There is a colorful yet not very diverse community of witches at polka dot junction. They prefer to not embrace diversity at this time and remain as always, black cats and witches only. Some of the cats have considered moving on, not to mention other cats at the junction who have chosen not to work for a witch claiming that they find it a bit stifling. The very first witch to take flight from polka dot junction was on a Halloween night many many moons ago. She was known as Lady Shakes and returned that night missing a shoe, thereby establishing an ongoing tradition.

Take-Off Practice is mandatory and of utmost importance for all witches and those who aspire to be. Cats do not have to be present at every practice and generally hang out at The Broomstick Café whenever their presence isn’t required. Aunt Agatha and Little Roo are descended from one of the oldest and most established families of polka dot junction and yes, they are really Aunt and Niece. Little Roo’s mother is not a witch and never has had any interest in that profession. She spends most of her time in the city and Little Roo the most part, lives in Wakwitch Village training to become a full-fledged witch.

There is nothing seriously wrong with Wrong Way. Despite her many and abundant talents, she has never had a very good sense of direction. Okay, let’s go ahead and edit that. She has absolutely no sense of direction whatsoever and often has to spend the night in unfamiliar territories. No biggy, right? The only time that this presents as a serious problem is on Halloween night when she doesn’t show up at the Broomstick Tavern in time for the festivities and everyone knows that she has ended up in Salem Massachusetts again. The security there is tough and sometimes it takes her a few days to get out and more than that to recover

PS: Let’s face it, despite her minimal flaws, she does happen to be a stunning beauty.

The Dogs of Polka Dot Junction

We are not certain about the canine population of polka dot junction because we have a suspicion that those who may be here illegally, do not fill out their census form. Obviously, there is a notable Beagle population. We do know of a few Bernese Mountain Dogs . . . notorious for stealing shoes and Kootis the Koon Hound who is dearly loved by all. (no picture available)

The beagles occupy a neighborhood known as Beagle Bay (please refer to map of polka dot junction).  The majority of beagles only venture out in the rain but a few are more adventurous.  One of the most dignified and revered of the “Rainy Day Beagles” is Henry The Professor. You will certainly recognize him as he has practically become a permanent fixture at the center of the junction. This is where everything converges. This is also where the express train stops. He never gets on the train because he is waiting for the bus that was discontinued nearly 3 years ago. He has been gently reminded a few times but being resistant to change and a bit stubborn, he refuses to accept it.  Obviously, he stopped “singin’ in the rain” years ago but still appears on many products available for purchase at polka dot junction.

Another esteemed and kind-hearted resident of Beagle Bay is Grandfather Beagle.  Despite his formal demeanor, he is truly adored by the community, especially by the younger beagles because of his patience and generosity.  He always has his pockets full of bacon and pistachio butter dog treats! GB (as he is sometimes called) is also a war veteran, having fought in the Historic Battle between the Dots and the Stripes. He penned the successful play “The Importance of Being a Beagle” and now serves as the publicist for both and polka dot junction. For these past and present contributions to the community, he is commemorated every year with a festival to which all must dress in dots, stripes or for some unknown reason, even checks!

At the moment there are only two known Bernese Mountain Dogs residing at polka dot junction. Since they are cold weather dogs bred in the Swiss Alps, they live in an area directly northeast of The Mayor’s home.

There is actually a mountain there. In the handful of years that they have inhabited that area, they have only made their presence known at Christmas time when they visit the center of the junction to shop and to spread glad tidings. No one is certain what else they do. Sounds of yodeling have been heard coming from their area. It is believed that they sleep a lot and are thinking of adopting a cat!

It’s only fair that we should take a moment to acknowledge Crow.  He is now actually referred to as “Le Crow” since donning his red beret. He was indeed born and raised in The Loire Valley of France where some of the most select wines are produced. Given this, one might wonder how he ended up in polka dot junction. That’s a very good question and a bit of a story. The full story can be found in our one and only chronicle “Hearsay From the Junction”. Let it suffice for now to say that Le Crow is very happy with his move to but has proven to be a bit of a diva. He is quite vain and enormously proud of his Romanesque profile, glossy plumage and yes, if you look closely, you will see that he does indeed have violet colored eyes. He claims to be a distant relative of a famous actress who also was in possession of beautiful violet eyes. He attributes his looks to good genes and to his recent contract to pose for the cover of “Vanity Crow”.

pd junction is where you find the storyline, directory, and characters or polka dot junction... polkadotjunction.com